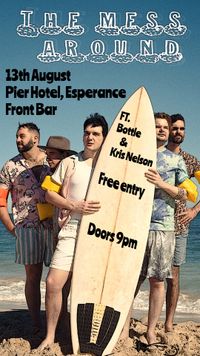 The Mess Around Down South Tour! The Pier Hotel

Conceived in the depths of pandemic anguish and born on the beaches of WA, THE MESS AROUND bring an original flavour to your beloved indie music.

These crazy kooks take their larrikin attitude into everything they do including their debut video clip 'King of the Street" and latest release "Still Broke" which have the same energy as their hectic live shows.

A highly talented melting pot of musical backgrounds, their music though often irreverent, is inconspicuous in its messages of love, self-improvement and finding a balanced lifestyle.

The surf rock band you see to be inspired and are guaranteed to have an awesome time with can be found now on their debut KING OF THE STREET tour playing shows across WA’s gorgeous south west.